This year marks Debbie Hannam-Walpole’s 25th year at Queen Mary’s. Debbie, who was then Miss Hannam,  joined the school as a Maths and PE teacher in 1996 and was appointed Deputy Head in 2005.

We spoke to her about her first impressions of life at school and the changes she has seen over the past quarter of a century.

I remember going up the drive to Baldersby Park, seeing the magnificent building for the first time and thinking to myself “I’ve no hope of getting a job here” … little did I know I’d still be at Queen Mary’s all these years later!

What were your first impressions of Queen Mary’s?

The first person I met was Margaret Atkinson who was the school secretary at the time. She took me straight through to the Drawing Room to meet Mr and Mrs Belward. After a two minute chat, Mr Belward offered me the role of PE and Maths teacher – I asked if I could possibly look around the school first before I decided! I wandered around the school and thought, “Wow – this is a happy place,” –  and accepted the job.

What’s kept you at the school so long?

That’s a very good question! I never imagined I’d still be here after twenty-five years. After a few years I wanted more of a challenge and I was appointed the role of School Coordinator, helping with the school calendar, and assisting the Deputy Head with the day to day running of the school. Then in 2005 Mr MJ appointed me the Deputy Head. To be honest, I think it’s the girls that have kept me here – and the variety. Just as no two pupils are ever the same, no two days or weeks are ever the same, so there’s always something to keep me busy. 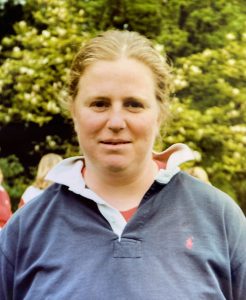 What are the biggest changes that you’ve witnessed?

The amount of paperwork has grown enormously! I’ve seen the modernisation of everything from health and safety, admissions, finance, risk assessments and computerisation of data. What was once a quaint school has been transformed into a modern business, while somehow still managing to maintain its unique nature and ethos.

Lockdown and our overnight move to online learning brought about a rapid shift in teaching and learning methods and sped up the integration of digital learning into traditional teaching. We had no idea how it would play out, but the way the staff and pupils responded was a credit to everyone, although nothing beats having everyone back in the classroom.

I don’t think the archetypal Queen Mary’s girl has changed much at all over the past twenty five years. They have always been hard-working, full of life, fun, kind and willing to give everything a shot.

I think it’s probably the parents that have changed the most in many ways – while they have always been hugely supportive of their children, today’s parents are much more involved in the daily minutiae of school lives than they were back in the 1990s, which probably reflects a societal shift. 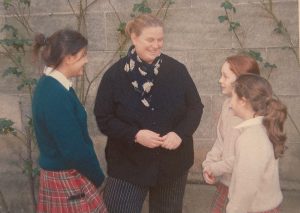 What are the funniest moments you can remember?

There are far too many to repeat and some not fit to be recounted! The girls are always a source of great entertainment – it’s not in every job that a pupil will burst into a classroom, and apologise for being late because their ferret ate their chicken! Mischief night is always a big highlight of the school year – from pupils decorating the cherubs on the dining room fireplace in miniature bikinis and swimming trunks, to bringing a horse into the Great Hall, the girls were always plotting something. My favourite was probably the time they put a ‘For Sale’ sign up at the end of the drive, or when they moved the entire dining room out onto the West Lawn. Consequently the whole school had to eat breakfast outside in the frost and freezing cold – which slightly took the edge off the girls’ sense of humour!

How would you sum up Queen Mary’s?

We all work hard but we make sure there’s a lot of joy in the process. It is a school like no other, where girls are encouraged to maximise their potential, push their boundaries by trying out all sorts of activities and, most importantly, look out for one other and accept each other for themselves. 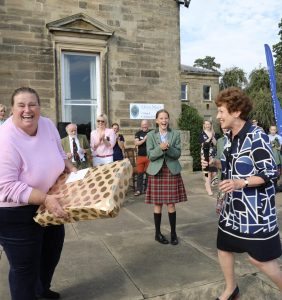