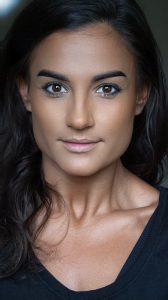 Perseverance, hard work and dedication have underpinned Ionica’s life. Born in Romania under the Ceaușescu regime, she spent the first two and a half years in an orphanage in Cluj, before being adopted by a British family. She was subsequently brought up in North Yorkshire and attended Queen Mary’s between 2000 and 2005. After attending Drama School, Ionica (known as Adi Calvert while at school) has had a career across TV, stage and the big screen, most recently appearing in BBC One’s The Syndicate, BBC Countryfile Live as a presenter and as a judge on BBC One’s All Together Now.

What was your first impression of Queen Mary’s?

My first thought was that it was slightly magical, it looked like something from a British film! It was such an enormous place compared to my previous school, but I thought it was very beautiful. I met Mr Carter on my trial day and told him he looked like Basil Fawlty (John Cleese). He then started doing impressions of the Ministry of Funny Walks right across the Great Hall and I thought ‘I’m going to like this place!’.

Debbie Hannam was definitely the most influential for me – I absolutely loved sport but didn’t really feel I was ever good at anything.  I was then picked to play U16 when I was only in Year 7 which was a huge achievement for me. I felt then I’d found my place in the school.

Queen Mary’s taught me that it was really important for pupils to look after each other. It felt like a big family after being at a small primary school. The biggest change for me was attending an all girls’ school as I was definitely a tomboy! 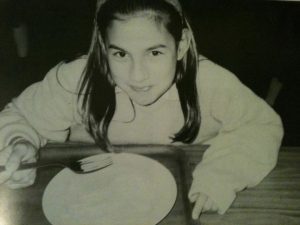 Yes, I still see and chat with Sally Fletcher, Lottie Kent, Abigail Weston (Cowing) and keep in touch online with lots of others too. It’s so easy with the internet to keep in touch, which is lovely.

When I left school I went to York College – I wasn’t sure whether to do sport or photography. I knew whatever I chose was always going to be vocational. Musical Theatre was the closest thing I felt to gymnastics, which I had always enjoyed, so I studied that and absolutely loved it! I then auditioned for East 15 Acting School – over 4,000 people had applied and I was one of  just 16 lucky people to be awarded a place. After a year and a half I had to have a major knee operation and ended up moving courses to the Musical Theatre Academy.

Straight after graduation I worked in a series of unpaid and low-paid jobs, trying to build a network and understand the industry. As much as they teach you at Drama School, like anything, you only really start learning once you’re out in the big wide world. That started the ball rolling and I got work in music videos, short films, and even Holby. This was then followed by a principal role in the pantomime at York Grand Opera House.

Even when I’m in employed work, I’m always auditioning for the next job. It’s a combination of relentless networking, attending events, showcases, workshops, classes and supporting others in the industry. Every day requires talking, writing messages, emails, networking, constant connecting with people in the industry. No two days are the same, nor are two years the same. Sometimes you’re getting triple booked and then sometimes you won’t even be ‘seen’ for six months but you just have to keep striving, keep pushing and not let the fire burn out. With reality TV I think a lot of people presume actors just want to be famous, but that couldn’t be further from the truth. It’s about being creative and being a creative. It’s an art.

For the past six years I’ve trodden the panto boards which, as those that have done it will know, is a full-on few months! Usually you get about ten days of rehearsals, then can have up to a two month run. We perform two or three shows a day, six days a week; so depending on the company and venue you can do between a 12 to an 18 show week. It’s just the most fun, but it certainly builds stamina – that’s for sure!

What advice would you give to someone wanting to embark on a career in your industry?

Be a nice human being, always be the hardest worker in the room, never stop going to classes, never be complacent, be kind to one another, ignore the white noise and remember that you’re only as good as your last recommendation, not your last job!

My advice for those students currently attending Drama School now, would be to start putting the feelers out for agents before your showcase. Get ahead and be ready, because once showcase season starts, it starts.

What are the best parts and worst parts of your job?

The best part is when you’ve invested a lot of time in an audition and you land a job that you didn’t expect to get, or when you work with someone you’ve always dreamt of working with (for me that was the amazing, late Kay Mellor). You meet some brilliant people, insanely talented people and people you’ve seen growing up, both on and off the panel: sometimes you are auditioning/working alongside them. Very early on I auditioned for Andrew Lloyd-Webber and it didn’t feel real! When you are in a room with someone like him, it’s like having a masterclass. You learn so much. Their wealth of knowledge and years of experience are invaluable, so it’s vital to embrace the moment and take everything you can from that audition. You will always learn something from them and that day.

The worst part of the business is the finance – you can’t budget like normal people. You may get a long theatre run that isn’t particularly well paid and have to work other jobs around it,  such as waitressing or teaching, but then land a commercial that might be one day’s work which sees you out for the year! Nobody goes into acting expecting to be permanently employed or expecting to make millions, but Covid-19 had an enormous impact on many in this sector. 90% of us lost all our work and many lost accommodation due to falling through the gaps of financial funding. It was a really tough time, certainly the worst time of my life mentally.

Another disadvantage of the industry for me is that sometimes people can act as if they are in competition with you when they don’t need to be. There are enough jobs for everyone, everyone has something different to bring to the table. Of course there is an element of competition, it would be naive to say there isn’t, because only one person can land the role, but it isn’t about tearing each other down to get there – it isn’t necessary. You may sing the same notes or have the same ‘look’  but you are YOU and that’s something no else can have or be. You can encounter ruthlessness but most people I’ve met along the way have been very supportive.

What is your biggest achievement in your career?

Every job I’ve done! Every time I work I’ve chosen to go to ‘that audition’ for ‘that role’ so when I’ve got it, it’s been an achievement. The jobs I’ve got unexpectedly, either off the back of another job, or have been scouted for have been incredible too, because I’d never have dreamed of even applying, let alone doing them (such as BBC Radio York, BBC Countryfile Live and All Together Now). Meeting and working with Kay Mellor on ‘The Syndicate‘ really was a bucket list moment. Again, working and watching people of such a high calibre at work is an amazing opportunity. You learn so much.

What are you working on at the moment?

Not long ago I finished a run playing Paula in Opening Up at the Union Theatre in London, am currently a freelance presenter on Crafter TV, hosting a weekly Chat Show and just finished playing Jasmine in Aladdin. I’ve also filmed a short film called ‘Glaciers’ with Steve Huison (Full Monty) and Joe Mallalieu (Coronation Street) which aired in March and have just completed filming for an Australian comedy series.

Most recently I’ve fronted a documentary called ‘Ceaușescu’s Children’ for BBC Radio 4. I got to go back to Romania to my birthplace of Cluj for the first time ever. The documentary covers the troubled history of Romania’s orphanages and also examines the state of child care and protection in Romania today after international adoptions were banned in 2014. By taking part in this documentary, I’ve had the opportunity that I and so many others could only dream of. I feel hugely grateful for the chance as it really was a life changing job – for many reasons.

To listen to Ceaușescu’s Children on BBC Radio 4, click here