Alison Dalglish attended Queen Mary’s between 1988 and 1991. She is now a professional viola player with the Orquesta Sinfónica de Galicia, a Spanish orchestra, created in 1992 based in A Coruña. She is married to Jose Belmonte Monar, a Spanish orchestral percussionist and has two children – Elia May, aged 12 and Alec, aged 10. We spoke to Ali to find out more about her musical career and her time at Queen Mary’s. 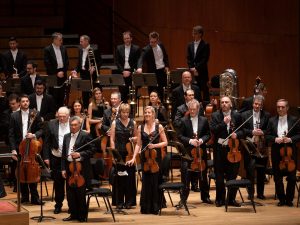 I think my first memory of Queen Mary’s was the day I went to play the violin for my scholarship audition (aged 8 or 9 I think) and playing in the main hall. I remember being really impressed by the enormous staircase! 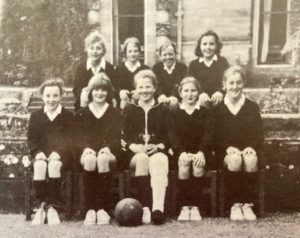 How would you describe your time at the school?

I would describe it as incredibly happy, with just the right balance of learning and fun! I was there until the end of Prep School, and it was a wonderful experience.

For me Mr Carter definitely had a huge impact and undoubtedly set me off on the right foot in the world of music.  Also Peter Belward, whose innate charm and loving character made him a very fine role model and inspiration for all who knew him. Howard Burnham definitely encouraged me to be better behaved – the thought of standing up in assembly with three black marks and facing his wrath did not appeal!

What was your favourite subject and why?

Music was my favourite subject, probably because I had a natural affinity to it, and it came so easily to me.  I also liked Food Technology. This was a subject that was only offered to me at Queen Mary’s and not at my next school, which I was really disappointed by. I loved it because it was different, really useful and appealed to my creative side!

I think Queen Mary’s taught me a lot about the importance of friendships and being able to get on with all sorts of different people, important lessons that have remained with me throughout my life.

Yes, very much so! I’ve kept in regular contact with girls from my year as well as several from the year above.

I’m an orchestral musician, I play the viola.  With music, the path to the profession begins at an early age, in my case aged 7.  The music scholarship to Queen Mary’s was my next step followed by another to Giggleswick. All those years of private school music tuition got me into the Royal College of Music in London where I completed my performance degree. However, those formative years of concerts, competitions and constant exposure to performance experience really started me off brilliantly.

What were the biggest obstacles you encountered?

Probably the biggest obstacle was actually winning an orchestral job in an audition. Nothing prepares you well for auditioning. It’s an experience with an incredible amount of pressure behind it, that comes literally after months and months of preparation. It makes your average job interview look like a walk in the park to be honest.

That’s actually pretty hard as almost every day is different. Every week we play different music and almost every week we have a different conductor.  A rehearsal day means being at work by 09:30 to warm up to be ready to begin rehearsing at 09:45. We rehearse for four hours then go home at lunchtime, and are free for the rest of the day.  It may sound like an easy day, but actually four hours of rehearsal is in fact just the right amount of collective time, leaving afternoons free for individual practise, or to teach private lessons.

However, a concert day means a two hour long dress rehearsal in the morning (unless it’s a particularly demanding programme in which case the dress rehearsal happens the day before), lunchtime and afternoon free to relax, then back in in the evening for the concert, the culmination of that week’s work.  Playing a rehearsal and playing a concert are very different.  Playing a rehearsal is much more relaxed, you can stop, take notes etc, but playing in a concert is when you have to give 100%, no mistakes, so it’s hugely pressured.

What advice would you give to someone wanting to pursue a career in music?

First of all I would advise them to be really sure that they have got what it takes. Their music teachers (specifically their instrumental teachers) could advise them on that.  Secondly I would recommend they do every youth orchestra or music course that they can throughout their formative years.  Thirdly, once trained be prepared to audition for a good long while (possibly years) before getting a job.

What would you say were the highlights and hardest parts of your job?

The best things about my job are the regular opportunities to travel.  I have toured much of Europe, South America, and the Middle East with my job and seen cities and been to places that I otherwise wouldn’t.  Also, with my job I get to perform in some of the world’s most amazing and beautiful concert halls and cathedrals, something I consider a privilege.

The worst parts of my job would be…. ooh, that’s pretty hard! I feel very fortunate and love my job. Perhaps the physical aspect is the hardest part of my work. I’ve had to take time off work due to tendonitis caused by the repetitive movements of playing an instrument every day.  Many of my colleagues have suffered with it too, but work allows us physio and massage sessions every year to help ease it.

What would your advice be to a thirteen year old pupil?

I would tell them to take every single opportunity available to them, try everything that a school like Queen Mary’s offers.  If they have an idea of which profession they would like to go into then they should go for it 100% and if not, they should try everything on offer and aim to find a career in something they really enjoy and that makes them happy.  And if they don’t have a clue then I’d tell them not to worry – after all,  they’re only thirteen and they still have plenty of time to figure it out!

Finally, how would you describe Queen Mary’s?

I would sum up Queen Mary’s as a big and happy family, with a very good education thrown in!

To listen to Ali perform please click this link: https://youtu.be/4aVMetrLGZ0