Interview with Olivia Mulligan, Poet. Olivia attended Queen Mary’s from 2005 – 2010. During lockdown of Spring 2020 she embarked upon a poetry writing project, gaining national coverage and resulted in her being appointed BBC Radio York’s Poet Laureate.

Olivia attended Queen Mary’s from 2005 – 2010, before studying A levels at St Aidan’s, Harrogate and reading Drama and Creative Writing at Royal Holloway, University of London. She then worked on Horse & Hound Magazine, before moving back to Yorkshire where she worked for the Yorkshire Air Ambulance. In spring 2020, whilst having to shield during lockdown, Olivia embarked on a poetry project which gained national media coverage and resulted in her being appointed  BBC Radio York’s Poet Laureate. She published her first collection of poems, Poems on the Gate Post last summer and is currently working on a second volume. We spoke to Olivia to find out about the influence Queen Mary’s had on her life and to hear more about her writing.

I remember it all feeling like a bit of a daydream! I’d never been to a school like it before, it was so lovely and one of a kind.  Before I started I made a promise to myself that I wasn’t going to like it and would return to my old school, but upon arrival I just loved it and broke my promise pretty quickly. I started in the Easter Term, with Connie Thompson. We formed a bond instantly and are still best friends to this day. 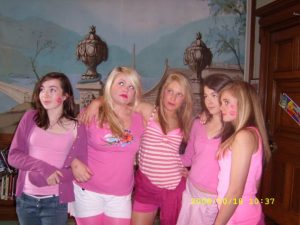 Who were your most memorable teachers?

Mrs Foulser had a heart of gold. She made time for everybody. She was sincere but had moments of craziness which made her lessons great fun. You could trust her profoundly.

Mrs Coull was instrumental in my current profession – if it wasn’t for her encouragement I could have slipped through the net, but thanks to her I achieved two A*s in English. Lots of people don’t believe they have potential, but if someone believes in you, you want to do your best for them. Mrs Coull gave me the confidence that I could do it. Now that I run poetry workshops, I’ve really taken this into consideration – when somebody appreciates your work, and focuses on the positives, it really encourages the student.

What was your favourite subject?

English, Drama and Art were my definite favourites. I absolutely loved creative writing; Drama was great fun and a good outlet. As a person I’m quite shy in myself and rather introverted but Drama was a way of being more confident by taking on different characters. I studied Drama as a student, but I was very different from your average Drama student as I’m neither loud nor extravagant!

I found Art a really relaxing subject. When you love a creative subject, it doesn’t feel like work and I found it a great way to spend my downtime. I wasn’t the best artist but we had to write about our work as part of the GCSE and I think my written words really helped to boost my grade.

What is the biggest lesson you learned at Queen Mary’s?

The emphasis placed on kindness, consideration for others and good manners. We were always being asked to think about how we could help others, which I think is something that translates really well to the real world.

Do you keep in touch with anyone from your year?

Yes, I’m in regular contact with several OMs – Connie Thompson, Hermione Moore, Tiff Duffield and Maisie Latto. We always talk about our times at QM and all the things we did – for example, the time that Connie brought her horse into the Main Hall on Mischief Night, when it relieved itself on the carpet!

It has been most unexpected, and I have my mother and Lockdown 2020 to thank for it! Since leaving university I’d always kept my writing going but never expected anything to come from it. During lockdown I was required to shield and I found it quite difficult initially. My mother challenged me to write a poem each day, which to begin with I thought was a rather ridiculous idea, but it very quickly became my favourite part of the day. I started pinning my poems to the gate at the end of the drive for passers by to read and left my phone number so that people could text in and suggest topics for me to write about, so the whole village could be involved. BBC Radio York heard about what I was doing and submitted one of my poems to the BBC Upload Festival, where it was performed. My first volume Poems On The Gatepost was published last Autumn, I’m currently writing my second and I’ve also been made BBC Radio York Poet Laureate, reading out a poem on the show each week. In addition, I’m running virtual poetry workshops across the country  for school children. 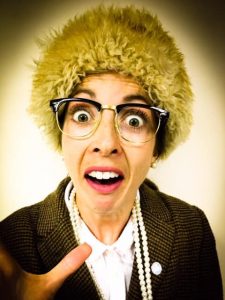 What advice would you give for anyone wanting to pursue a writing career?

Keep writing. Keep reaching out, keep submitting. Be prepared for a lot of rejection, but keep going nonetheless. This was by no means the first project I’ve done – rejection felt endless. People can look like they’ve had immediate success but the work going on in the background is substantial.

If you could look back at your time at school, what advice would you give your 13 year old self?

I don’t have many regrets about my school time – we didn’t care about looks, make up or what we wore. We were so privileged that we went through school unburdened by worries that affect some girls of that age.

I would tell myself to believe myself more though. And to try harder at Cross Country! I always thought running was nowhere near as exciting as the other sports and never tried. I wish I had done more as I only found the sport when I was older and became President of Athletics and Cross Country at University and I could have so many more years enjoying it if I’d found it earlier. I really should have listened to Miss Fieldhouse!

What is your overriding impression of your time at Queen Mary’s?

True, very pure, happy memories – it has such a special place in my heart.

To listen to Olivia’s weekly poem, tune in to BBC Radio York at 1.15pm every Saturday. Her book, Poems on The Gate Post, is available now in hardback, paperback and e-book. Her second volume of poetry will be published this summer.