The brand new facility, available for both Queen Mary’s pupils and the wider community, is certified for Hockey, Netball and Tennis and will also provide a venue for classes, meetings, events and celebrations.

After leading her team to Olympic gold, Sam Quek, MBE is a true example of what hard work, drive and perseverance can achieve. From the Commonwealth Games to the EuroHockey tournament, the European Championship to the Olympic Games, she has played on some of the biggest sporting stages in the world. After receiving ‘Man of the Match’ for her impressive performance in the final of the European Championships in 2015, where her team took home gold, it was no surprise that Sam was later announced as a member of team Great Britain for the Rio Olympic Games in 2016 where she helped the team to win the first ever women’s hockey Olympic gold medal for Great Britain.

Sam Quek said: “What wonderful facilities. I am so impressed with the new astro and sports pavilion at Queen Mary’s. It has been a joy to coach on the astro, surrounded by countryside, and the pavilion is a fantastic building. The Queen Mary’s girls were fabulous and they made me feel part of the family, thank you for inviting me.”

Jemima said: “I love playing on the new astro. The surface is so fast and the floodlights allow us to practise into the evening. It was amazing to meet Sam Quek who inspired me to train hard and be the best that I can be.”

Careful plans were implemented, based on current Government guidance and social distancing rules, to allow Queen Mary’s pupils from the Prep and Senior School to take part in Hockey sessions throughout the morning and join in the celebrations.

The new facility in the grounds of Queen Mary’s School includes a full-sized synthetic pitch constructed by Cleveland Land Services of Guisborough and overseen by Notts Sports, official partners to England Hockey and the UK’s leading specialist in the design and supply of synthetic surfacing systems. Alongside the pitch a two-storey Sports Pavilion, constructed by Moduloft at their Catterick Bridge site, provides changing rooms for up to four teams, a central multi-use space and a viewing platform.

Carole Cameron, Head of Queen Mary’s School, is delighted: “Queen Mary’s sporting achievements are highly regarded in the region. The new floodlit, all-weather synthetic pitch will allow our pupils to access these top-class facilities and practise for longer. These fantastic opportunities will also benefit the local community and beyond with flexible hire available throughout the year. I am thrilled that Sam Quek was able to officially open our new facilities and inspire the next generation to enjoy exercise and succeed in sport.” 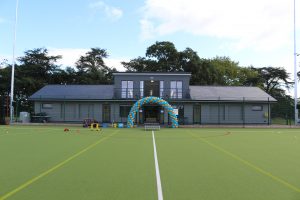 For further information regarding hire of these facilities please contact 01845 575000 or email events@queenmarys.org.