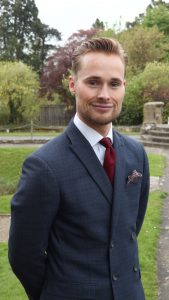 We are delighted to announce that Craig Nellis will join the team at Queen Mary’s School in September 2022, as the new Assistant Head: Prep and Pre-Prep School.

Craig is joining Queen Mary’s from a federation of central London primary schools, where he is responsible for Maths, Middle School, PSHE and Emotional Wellbeing. Craig brings with him a wealth of dynamic educational practice, management expertise and a huge amount of enthusiasm.

We spoke to Craig about what has inspired him and influenced his career, and what he is most looking forward to about joining Queen Mary’s in September.

What made you first want to go into teaching?

I’ve always really valued education from a very young age – I really believe that without education there is no future. I had a great time at school and although teaching wasn’t something I had initially thought about, when I was choosing my A levels, my teachers suggested that it was something that I should consider. They obviously saw something in me that at that time I couldn’t see in myself! I went on to take a degree in Education and absolutely loved it. Every day you make a small difference. It’s not easy – the huge number of teachers leaving the industry is testament to that, but for me the rewards completely outweigh any obstacles.

Where are you currently working and what is your role?

For the past few years I’ve been working at a Federation of four primary schools near Tower Bridge in central London. I started teaching Year 3, then moved to Year 6 to prepare pupils for SATS exams. In addition to being Subject Leader and Maths Lead across the Federation, I’ve been Team Leader, Middle School Lead, PE Lead, Events and Clubs Lead and recently I’ve also been appointed Mental Health and Wellbeing Lead. It’s been very busy and challenging. I’ve relished the opportunity to fine tune my skills in leadership and management, and really make a difference to the pupils’ educational experience within the schools.

What do you think makes a good educator?

I really think it’s hugely important to have a connection with the pupils and establish mutual respect and trust, something I have already seen at Queen Mary’s. For me, a good educator, whatever their role within school, is caring and patient. I believe that children should be given the best academic start in life that we can give them, but they also need the ability to reason and listen and find their own opinions. It is really important to prepare them for 21st Century life, to be good citizens and be ready for the world around them. They need to be adaptable, responsive and flexible – ready for life.

Who were you influenced by?

In Year 6 I had a teacher, Mr Cornforth, who is now Head of my old school. I really connected with him as he invested time in me. I love to inspire pupils in my care in the same way and would love them to remember me in many years time.

What are you most looking forward to about joining Queen Mary’s?

To quote the prospectus – I’m looking forward to making it my story! I am excited to join at a time when the school is thriving with a record number of pupils within the Prep School and fantastic value-added results. I am looking forward to building on this, seeing through the new Pre-Prep Development and bringing many transferable skills and practices to Queen Mary’s. I’m already counting down the days to September and can’t wait to meet pupils and their families and get stuck into life at QMS, embracing the lifestyle and community.

What was your first impression of the school?

It was ‘Wow’! It’s quite a grand building and with the portraits of King George and Queen Mary looking down on me, it could have felt rather intimidating, but from the outset it felt like a warm handshake. I then had a tour of the school and as I met various pupils and members of staff, they were all very friendly and welcoming and I really felt there was a match with my own values and ethos.

Which key skills are you hoping to bring to your role as Assistant Head: Prep and Pre-Prep School?

One of the learning systems I’ve recently been trained in and implemented is termed ‘Sticky Learning’ – helping pupils make links with what they already learned before, perhaps in a previous year, so that they view their education as a journey rather than a series of disconnected facts. I’m keen to ensure that pupils have a deeper understanding of the curriculum and why they are being taught that particular fact or topic.

As a Wellbeing Lead, I feel very strongly about helping children articulate their feelings and enhance their emotional intelligence as I believe this is a skill that will serve them well throughout their lives. I’ve recently taken part in a study in Southwark schools that was backed and implemented by Yale University which gave children the tools to regulate their emotions and enhanced their academic output as a result.

Finally, are you a fan of dogs?

Yes – I have two! Alan is a working Cocker Spaniel and I also have a Jack Russell called Steven. I’m looking forward to bringing them to work with me so that they can meet all the staff and pupils!