Meet the Chef at Queen Mary’s

Food at Queen Mary’s is provided by Holroyd Howe who specialise in providing freshly prepared, nutritious food and we are very lucky to have Gary Forster as our Head Chef.

Head Chef Gary Forster has packed a lot into his career so far – starting out at the Michelin-starred restaurant at Seaham Hall under Stephen Smith and Kenny Atkinson, during which time he helped Kenny on the Great British Menu.

Stints at Judges in Yarm, the Black Horse at Kirby Fleetham then the Box Tree in Ilkley followed, including one of his career highlights of working with Marco Pierre White. After becoming an Executive Chef of six restaurants he decided to move into contract catering, with Holroyd Howe, which is how he arrived at Queen Mary’s.

“I love it here – it’s my dream job,” says Gary. “From the beautiful grounds, to the happy atmosphere in the school, to the enthusiastic girls and work-life balance – it’s a lovely place to work.”

Gary puts great passion into creating dishes that cater for the girls palettes with a focus on fresh food and nutrition:  “We aim for every dish to be as nutritious as possible, usually by incorporating lots of vegetables and grains into each meal. For example, shepherd’s pie will have hidden barley and turnip within the mince, or flapjack will have additional dried fruits.”

“Queen Mary’s is one of the only schools in the Holroyd Howe catering portfolio that is still offering such a varied option during the pandemic,” says Gary. “Some schools with thousands of pupils are only able to deliver a packed lunch to classrooms, but because of the size and ethos of the school, we are able to offer a wider variety of choices.”

Despite restrictions, Queen Mary’s pupils have access to an amazing range of choices: the lunch option includes a variety of salad boxes; a hot dish, a vegetarian hot dish, freshly made soup with homemade bread, or jacket potatoes with fillings. For dessert there is always a hot pudding option such as chocolate brownie, a fruit pot or yogurt pot.

Similarly, pupils are still able to enjoy morning break options such as savoury cheese straws, pizza wheels, flapjack with fruit, fruit selection, cheese on toast or crumpets, while afternoon breaks tend to be a sweeter option of fruit, smoothies or fruit flapjacks.

“Sometimes it can be a challenge introducing the girls to new tastes” says Gary, ”If they had their way they would have pasta every day of the week! We try to get around this by using tasting tables – with a seasonal fruit or vegetable cooked in a variety of ways for the girls to try,  so they can get used to a new taste.” 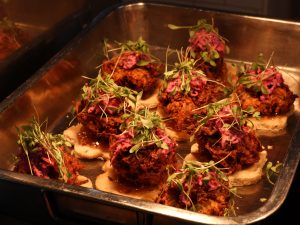 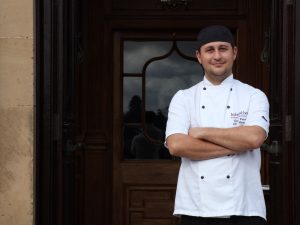 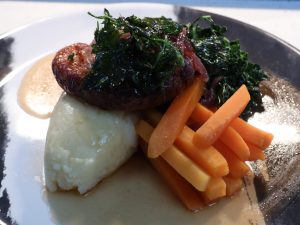 Click here for the menus and to find out more about food at Queen Mary’s School.